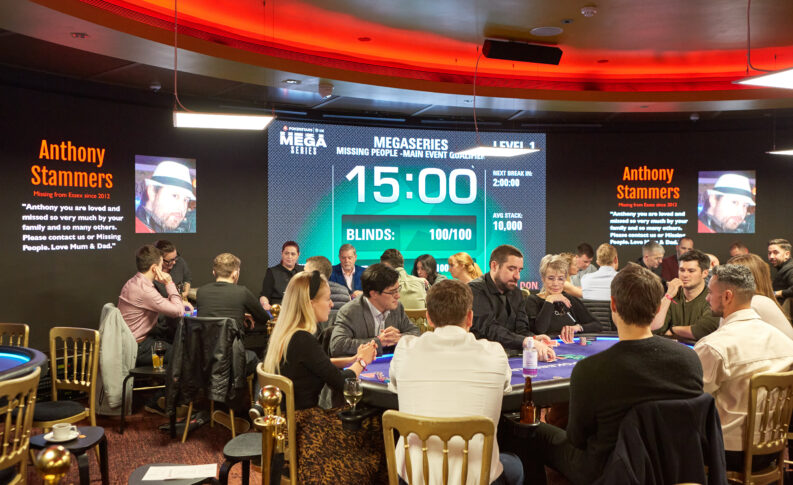 PokerStars teams up with Missing People

PokerStars UK has teamed up with Missing People to raise awareness of the charity’s incredible work and the existing missing people in the UK. Missing People is the only charity in the UK dedicated to bringing the 170,000 children and adults that go missing every year back together with their families.

A campaign video was launched at a media event held on November 17 at London’s Hippodrome Casino, which is also running PokerStars’ new mega series from November 15 to November 21. Invited guests were able to view the new supporting campaign video and to hear from the parents of Anthony Stammers, missing since 2012. The evening continued with a poker event for media and invited guests. PokerStars also donated £100 to Missing People for every player at the Hippodrome playing in PokerStars Mega Series on November 17.

The work of Missing People saw more than 700 adults reported missing in 2020 found safe and well. The #TogetherforMissing partnership is seeded by a £150,000 donation from Flutter to support Missing People over the year.

To support the work of the charity, PokerStars and Missing People have developed the film [link] showcasing their efforts to find and reunite loved ones with their families. PokerStars UK have also launched a new deck of cards which are ‘missing’ their Kings, Queens and Jacks, and display the Missing People helpline number for anyone who needs support.

Sue Hammett, Group Head of CSR at the Flutter said, “It was a real delight to gather at the Hippodrome with the incredible attendees from Missing People, who work endlessly to help reunite loved ones. We were honoured to have the Stammers family with us who were brave enough to share their story. This had an impact on everyone in the room and highlighted even further the importance of supporting Missing People. This is another important step in our relationship with Missing People and we hope that our support will continue to help reunite families across the UK!”

Jo Youle, CEO at Missing People, said: “Missing People is pleased to have the opportunity to work with Flutter to help reach an adult audience at high risk of going missing – men aged 18-39. Our support exists for any missing person, every day of the year. Through this partnership we will also be able to highlight adults who are missing. We know opportunities like this to get the message out means so much for families of missing people that the charity supports.”