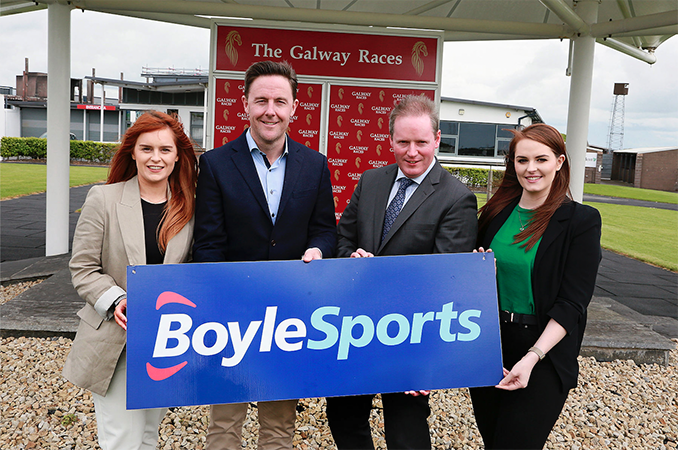 Galway Races Galway have announced a new three-year sponsorship deal with BoyleSports who are the new title sponsor for the Saturday of the Galway Races Summer Festival.

BoyleSports is a family-owned firm established by John Boyle. He opened his first shop in Markethill, County Armagh in 1982 with BoyleSports now firmly Irelands largest privately owned bookmaker, boasting over 360 shops across Ireland and the UK and an extensive Online business operating under the BoyleSports.com brand.

Leon Blanche, Head of communications at BoyleSports said: “It’s a real privilege and honour for all of us at BoyleSports to further enhance our commitment to Irish Horse Racing by signing up as title sponsors on the Saturday of the Galway Racing Festival.

“The Galway Summer Festival is synonymous with Horse Racing in Ireland and it’s a very exciting time to be teaming up with them as the traditional throng of racegoers return to descend on Ballybrit. No doubt they’re in for some thrilling contests and we are looking forward to playing our part in another fabulous festival.”

Michael Moloney of Galway Racecourse said: “BoyleSports have been a fantastic supporter of Irish racing and we’re delighted to welcome them on-board as the title sponsor for the Saturday of our Summer Festival.

“They’ve made a huge investment in Irish horse racing over the last few years and to have them as part of our race week programme is a great addition to the week. We look forward to working with the team on making this a great success for all involved.”

Widley regarded as the highlight of the Summer Season in Ireland, the Galway Races looks forward to welcoming its race goers back to Ballybrit for one amazing week that offers its guests great horse racing, entertainment, fashion, reunions with friends and family and an electric fun atmosphere that continues to draw people from all over the world.