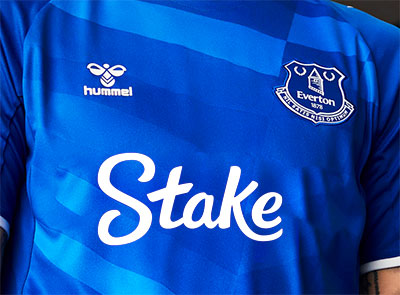 More than 20,000 people have signed an online petition calling for Everton to drop their new gambling sponsor.

The club announced the “record” deal with online casino stake.com meaning logos will appear on men’s and women’s team shirts next season.

Everton signed the lucrative £10m-a-season sponsorship deal with Stake.com in June. In January 2020, Everton chief executive Denise Barrett-Baxendale told the club’s AGM that ‘in an ideal world’ they would prefer a ‘different type of sponsor’ to a betting company.

But Everton returned to that type of sponsor by signing up with Stake.com, who recently became the UFC’s official betting partner in Latin America, Asia and Brazil. They declined an extension of the two-year partnership with Cazoo in search of a more lucrative deal.

‘The multi-year partnership with the leading casino and sports betting platform will commenced 1 July and is the highest value front-of-shirt deal in the Club’s 144-year history.

‘As Everton’s main partner, the Stake.com brand will feature on front of the men’s and women’s playing shirts, as well as appearing on screens and media backdrops at Goodison Park and Finch Farm and across the Club’s digital platforms.’