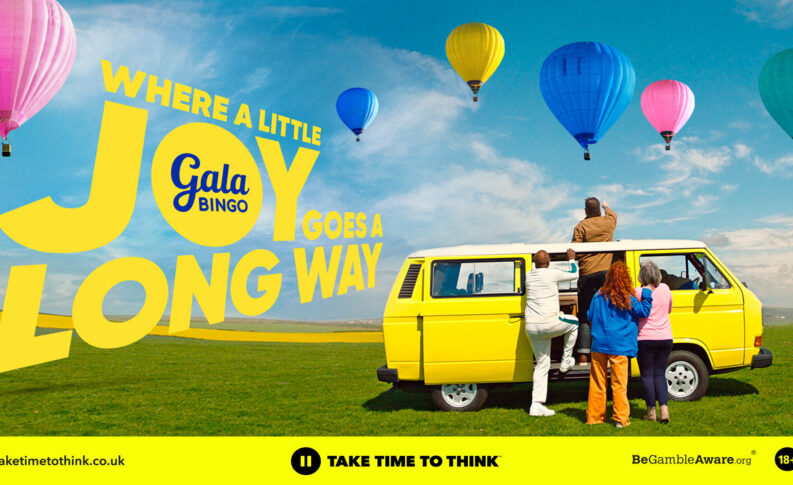 Gala Bingo launches their new brand campaign that brings the joy back to bingo in Britain.

The integrated campaign, launching with a 60-second TV spot, radio, digital, OOH campaign and PR, looks to inspire the UK with the fun of bingo.

The campaign was shot by Noah Harris, of Agile films, across the North-West of England earlier in the year. The 60” launch spot – ‘Look Up’ – follows a group of five friends (and Kodie the dog) travelling in their yellow van from the bottom to top of Britain, in search of the perfect view of 5 hot air balloons creating an epic ‘bingo’ in the sky. The film features the track ‘I Saw the Light’ by Todd Rundgren.

To add an extra touch of joy for keen bingo players eleven iconic bingo calls have been hidden throughout the launch spot for viewers to discover.

‘Look Up’ is supported by 3 product films, which will launch a series of new games for players to enjoy, and a Responsible Gambling message which sees the friends literally take a moment to pause.

The campaign’s digital, social, radio and OOH elements also launch today, with eye-catching bus wraps and taxi wraps across London. The campaign will continue across summer with PR events which are being managed by neverland in partnership with Capture Communications.

The campaign will be amplified by digital, social, radio and out-of-home (OOH) elements including bus wraps and taxi wraps across London.