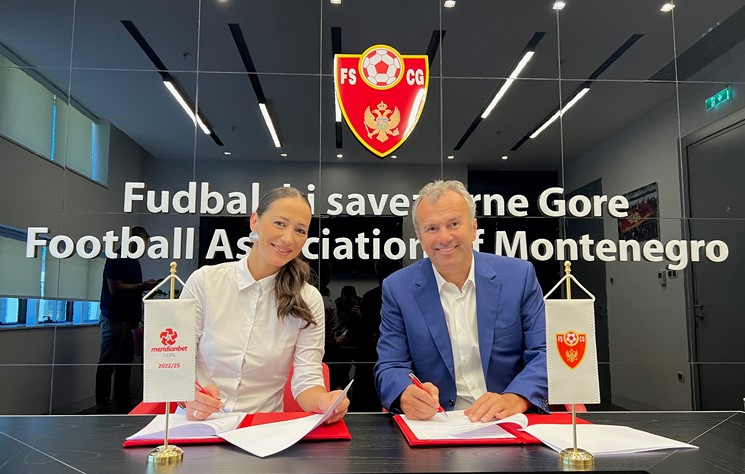 The Football Association of Montenegro and the Meridianbet company signed a sponsorship agreement today in Podgorica, according to which one of the leaders in the market of betting services will be the sponsor of the First Montenegrin Football League of Montenegro.

The elite football competition in Montenegro during the next three years, which is the duration of the sponsorship contract, will be called Meridianbet 1. CFL.

The contract was signed by the president of the Football Association of Montenegro, Dejan Savićević, and the executive director of Meridianbet Montenegro, Jovana Klisić. After signing the contract, Savićević emphasized that he believes that the Association and Meridianbet, as well as the clubs participating in the Meridianbet 1.CFL, will benefit greatly from this cooperation.

I am extremely pleased that today we signed an agreement with the company Meridianbet on the sponsorship of the First Montenegrin Football League for the next three years. The Meridianbet company showed exceptional determination in its intention to become a sponsor of our elite football competition, so we very quickly and easily reached the contract that was signed today.

I am sure that the cooperation between the Federation and the Meridianbet company will be at an exceptional level during the next three years, and I believe that all of us together, and above all the clubs participating in the competition, will benefit greatly from it. We are starting cooperation with a company that has experience in the field of sponsoring sports competitions, and I believe that together we will significantly improve the image of Meridianbet 1. CFL, Savićević pointed out. The president of FSCG also used the opportunity to thank Crnogorski Telekom for the long-term cooperation and sponsorship of the First League.

Many thanks to our previous sponsor, Crnogorski Telekom, for the exceptional cooperation during the previous 14 years when they were sponsors of the First League of Montenegro. I most sincerely hope that Crnogorski Telekom will remain part of the football family and that we will continue cooperation in another form, added the president of FSCG.

The Meridianbet company is one of the regional leaders in the market of betting services, which has been successfully operating in Montenegro since 2002. In addition to Montenegro and the countries of the region, Meridianbet operates in more than 10 countries throughout Europe, Africa and Latin America.

As a leader in the gaming industry, Meridianbet is focused on innovation in sports betting, while in addition to its primary business, the company has extensive experience in sponsoring a large number of clubs, organizations and individuals. At the same time, Meridianbet is a socially responsible company, which over the past few years, and especially during the pandemic, has helped the entire Montenegrin community, with an emphasis on the health sector. There was no lack of help when it came to ecology, children and youth, associations engaged in humanitarian work, such as Budi Human, “Parents” and others.

The executive director of Meridianbet Montenegro, Jovana Klisić, points out that the company is proud to have become a partner of the Montenegrin football league.

We are sure that we will all be satisfied with the signed partnership and the realization of everything we planned, above all our goal is for the 1st CFL clubs to get a completely new experience and for the league itself to be at the level it deserves. We are proud to have become a partner of one of the strongest leagues in Montenegro. We deeply believe that this long-term cooperation will succeed in giving a new look to Montenegrin football, said the executive director of Meridianbet Montenegro Jovana Klisić.