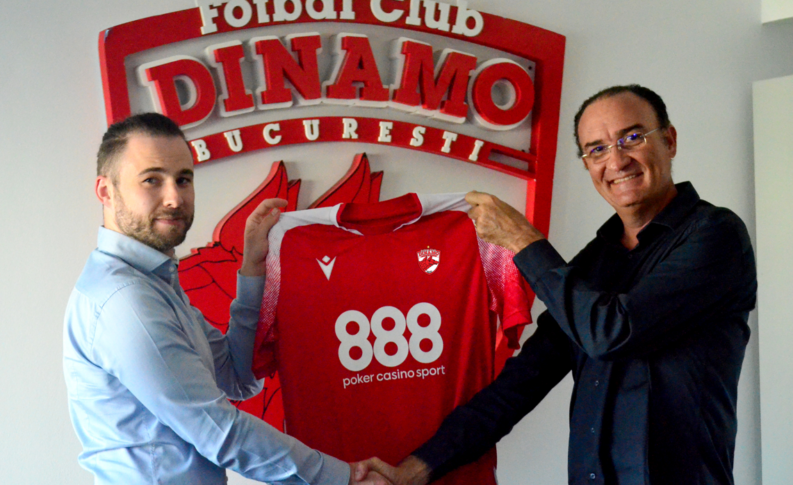 888 is delighted to announce an agreement with Dinamo Bucharest Football Club to become the club’s main sponsor.

888’s Romania office is less than 5 kilometres from Dinamo’s 15,000-seater Stadionul Dinamo and plays a critical role in developing unique and differentiated products as part of the Group’s product and content leadership strategy.

As part of the agreement, 888 will sponsor and co-create content to support the 18-time Liga I champions as it fights to return to the top flight this season – a campaign which begins this Thursday 4th August 2022 versus newly-promoted Progresul Spartac București. This will see 888 branding feature on the players’ shirts and training equipment, as well as throughout Stadionul Dinamo. Meanwhile, 888 will also create exclusive content for Dinamo’s YouTube channel.

The sponsorship is one of several platforms in the country where 888 will begin showcasing its new global brand positioning, Made To Play, in the coming months. Building on 888’s position as a leading global casino brand with more than 25 years of trust, awareness and credibility, Made to Play unifies 888poker, 888casino, and 888sport with a consistent and strong brand positioning. The campaign, which launches later this year in Romania, will take viewers into the dynamic and colourful world of varying 888 players and the reasons why they play.

Pedro Barreda Cabanillas, Director International Marketing & Head of Sponsorships, commented: “We are delighted to announce our sponsorship of Dinamo Bucharest, one of the most successful football clubs in Romania. As a sizeable employer in Bucharest, and strongly committed to supporting our local communities and the Romania market, we are excited to support the team this season and play a key role in this chapter of its long history.”

Vlad Iacob, General Manager of Dinamo Bucharest Football Club, commented: “We are pleased to welcome 888 as our main sponsor, ahead of the start of the upcoming season which begins this weekend. With deep ties to the Bucharest and Romania, 888 shares our desire for Dinamo to succeed and get promoted to Liga I this season. We look forward to working with the team in the coming months.”