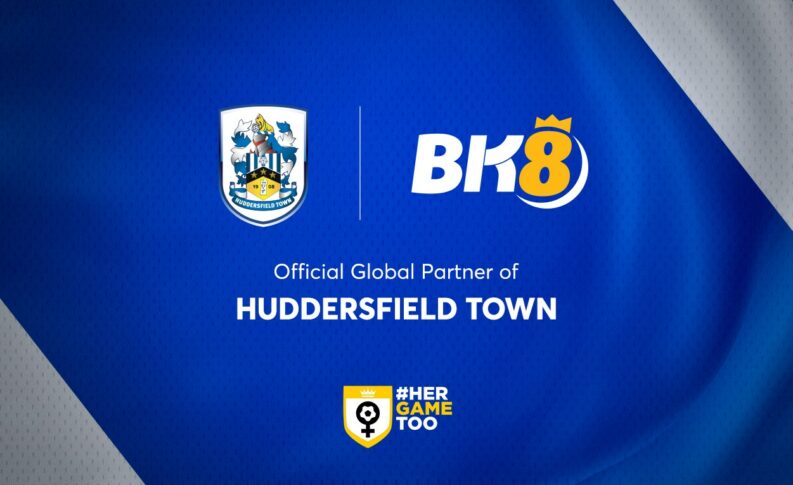 BK8 have extended their partnership with the Club for the 2022/23 season, with the agreement extended to include front of shirt sponsorship of the Huddersfield Town Women’s team.

As part of the new agreement, BK8 will relinquish some of their in-stadia partnership rights to support good causes, as well as contributing financially towards the promotion of female participation in football.

Commenting on the extended agreement Commercial Director Ian Birtley said: “It’s brilliant to have BK8 on board for the 2022/23 season and to see our joint commitment to grassroots women’s football lead to their sponsorship of the Huddersfield Town Women’s team.

“Having learned more about their business and company principles since discussions first began, we’re delighted to have them continue as our Global Partner and look forward to working more closely with them throughout the season.”

BK8 have supported Town across several initiatives since coming on board in December 2021, with a particular focus on women’s football. Most notably, BK8 ambassador and Lioness legend Kelly Smith joined HTAFC Women at a training session in March 2022, hoping to inspire the next generation of female players.

Furthermore, BK8 have joined us in pledging support for the Her Game Too movement, which was created by female football fans.

A spokesperson for Her Game Too said: “This extension to the partnership is a really positive step for all parties. Admittedly, whilst we had initial reservations – the Club and BK8 were quick to respond to us and they were brilliant in taking on board our concerns and the concerns of their supporters.

“We are now excited about working together with the Club to assist BK8, who have reiterated their strong intentions to support women in football.

“We are pleased to say that BK8 will also be supporting Her Game Too financially, as well as relinquishing some of their in-stadia branding to our platform. Together we can continue to support the development of grassroots girls’ football and raise awareness of sexism in the game.”