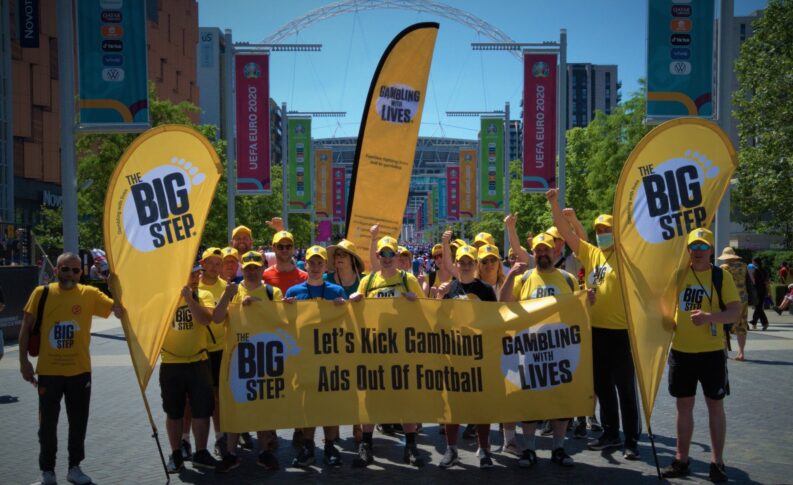 Hundreds of footballers will play in yellow laces this weekend to demand an end to all gambling advertising and sponsorship in football.

Clubs from across England, Scotland, and Wales are participating in the yellow laces campaign, which will be visible across seven different competitions, at a time when the UK’s gambling laws are under review. The campaign also falls on Addiction Awareness Week.

English Football League side Forest Green Rovers will be donning the laces during their FA Cup first-round match, which will be broadcast live on BBC One at midday on Saturday. Lewes Women, who play in the second-highest tier of women’s football, will also be wearing yellow laces for their match against Bristol City Women on Sunday.

Joining them are Glasgow City in their SWPL cup semi-final on Sunday, together with non-league sides Dulwich Hamlet, Billericay Town, Lewes, Llantwit Major, and Headingley AFC. Tranmere Rovers will also be supporting the campaign by warming up in yellow t-shirts before their FA Cup first-round match against Carlisle United on Saturday.

Dale Vince, Owner and Chairman of Forest Green Rovers, said: “Gambling companies are exploiting football and football fans, making huge profits at the expense of people’s lives. Their overwhelming presence in our national sport is hyper-normalising an addictive harmful product, with only self-regulation to protect the millions of young fans exposed – this is something Forest Green Rovers stands against.

“We will proudly wear yellow laces this weekend to reinforce our support for the campaign to end all gambling advertising in football.”

Public Health England estimates there are more than 400 gambling-related suicides each year in England alone, accounting for around 8% of completed suicides. The yellow laces campaign comes a week after Gambling Commission data showed a huge spike in 16-24-year-olds with gambling addiction. Several players wearing the laces this weekend have personal experience of gambling harm.

Lewis Carey, who plays for Lewes FC and is in recovery from gambling addiction, said: “I’ll be wearing yellow laces this weekend to draw attention to football’s role in facilitating gambling addiction and to demand change.

“As someone who has suffered with gambling addiction, it is so important that footballers like me do what we can to be positive examples to young people, and that must mean we aren’t forced to be billboards for gambling, nor play in stadiums that promote this product that destroyed my life.”

More than 700 gambling adverts can appear during a single televised Premier League match, with a gambling advert visible up to 89% of the time on Match of the Day. Gambling adverts also appear in children’s sticker books, junior sections of matchday programmes and video games age-rated 3+. Earlier this year, the bookmaker Betway was fined £400,000 for having clickable adverts on the junior pages of West Ham’s website, one where children could colour in a teddy bear.

James Grimes, formerly addicted to gambling and founder of The Big Step campaign, said: “Gambling is often a hidden addiction, and we wear bright yellow to highlight there is no shame and to remember all of the bright lives taken by gambling. This weekend is a bold reminder to the government that campaigners for gambling reform and our supportive football clubs are not going away until people can go to a match and support their heroes without being encouraged to gamble.

“Football is worshipped by millions and cannot be used as a platform to advertise addictive gambling products. We applaud and thank all the clubs taking part.”